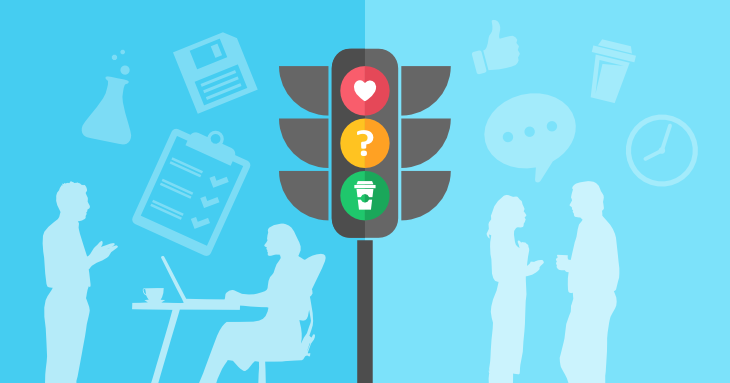 Occasionally workplace companionship blossoms into an office romance, but not everyone is comfortable with this. Mistaking friendliness for flirting at work can happen to anyone. However, that doesn’t make the experience any less awkward and frustrating.

My personal experience with romantic advances in professional settings

As a young engineer building up a professional network, I tried my best to leave a good impression on my colleagues. I’ve been lucky to befriend some amazing people. However, one experience reminded me that friendliness can also be misinterpreted.

During an internship, I was assigned to work under a full-time engineer. He was a laid back guy, but incredibly bright. While we worked together, he would offer guidance and mentorship. As we got to know each other through work, we found ourselves sharing stories and telling jokes. The comradery made work more enjoyable and I felt like I belonged. Furthermore, I was happy to build a mentorship relationship based on a solid friendship. Unbeknownst to me, the engineer had other ideas.

Getting asked out at work

Halfway through my internship, my colleague asked me out to the movies. My heart instantly dropped and my stomach felt queasy. I thought back to the past few months, wondering how this had happened. He was my mentor, I hadn’t felt any sort of romantic implications!

I blamed myself for his honest mistake. Was I leading him on? Maybe I shouldn’t have accepted his Facebook friend request. I scolded myself for keeping my personal life private and not bringing up my boyfriend earlier.

Normally rejecting a date wouldn’t be an issue. However, because he was a coworker and someone I looked up to, I knew I had to handle this situation delicately. I told him no. However, I explained that I had already planned to watch the movie with my boyfriend. By including this extra detail, I intentionally hinted that I was in a relationship already. This would kill two birds with one stone.

He simply replied with “ok”, but the effects of my rejection lingered the following weeks.

It was awkward, really awkward. He avoided eye contact and would only discuss work-related topics.

Fortunately, the tense atmosphere cleared up after a couple of weeks and we were back on normal terms. I was glad that he seemed to have gotten over the blunder and moved on. Sooner or later things were back to normal.

As my internship came to a close, he suggested keeping in touch. I happily agreed since I was eager to maintain this friendship and professional contact.

Toxic behavior outside of work

For the next month, we continued chatting online. However, I noticed some changes in his attitude. He had become increasingly passive-aggressive when I didn’t reply within a couple of hours. He would also shoot angry remarks if I didn’t type a lengthy response to his messages. Every time he got mad, I would apologize and divert the conversation.

After multiple passive-aggressive remarks, I knew something was off. It wasn’t normal for friends to have such high expectations like this. My gut feeling told me he still wanted to be more than friends. For good measure, I decided to subtly mention my boyfriend in conversation to drive the point home.

In response, he flipped out and told me that he didn’t want to be friends anymore. Immediately after, he blocked me from social media. It happened so quickly I barely had time to process what had happened. I was speechless and hurt.

Again, I blamed myself. Was I being too friendly? Maybe I should have just stopped talking to him altogether after the first time.

As I replayed the situation in my head, fury built up inside me. He wasn’t the only colleague I got along with at work. I wasn’t sure why he felt entitled to becoming my top priority.

Looking back, all my memories with him have been tainted with a different meaning. Was he only mentoring me because he wanted something more? Did he think I was lying about having a boyfriend the first time? I’ll never know the answers to these questions.

Shortly after, I reached out to my friends for their opinions. Many of my friends agreed that my co-worker was being inappropriate. What shocked me, was that some of my friends had similar experiences. Like me, these friends thought they were building up a professional network.

Lessons learned: Watch out for courtship from professional networks

Workplace romance can sprout up when you least expect it. Long hours spent with colleagues have the potential for romantic feelings to develop. However, both sides need to be on the same page. Realising midway that the friend you respected professionally was only looking for a date is extremely discouraging. Similarly, developing feelings for a coworker who doesn’t feel the same way can be problematic.

If you’re keen to avoid these awkward situations, watch out for early red flags and shut it down early. Keep your boundaries with coworkers if necessary and trust your gut feelings.

Apparently, in the world of STEM, girls don’t exist. And when they do exist, they look like...

Lack of Female Friends in Engineering

Diverse friendships are crucial for personal development and growth. As a girl in engineering, you may...

There’s a theory that offices are uncomfortable to increase productivity and decrease fatigue. It might be...

Traditionally male dominated fields are now encouraging diversity by giving more opportunities to women. While the...

Young engineering students work tirelessly to develop their careers. When they finally land a relevant internship,...

Studies have recommended that women opt for skirts in their job interviews as it helps them...